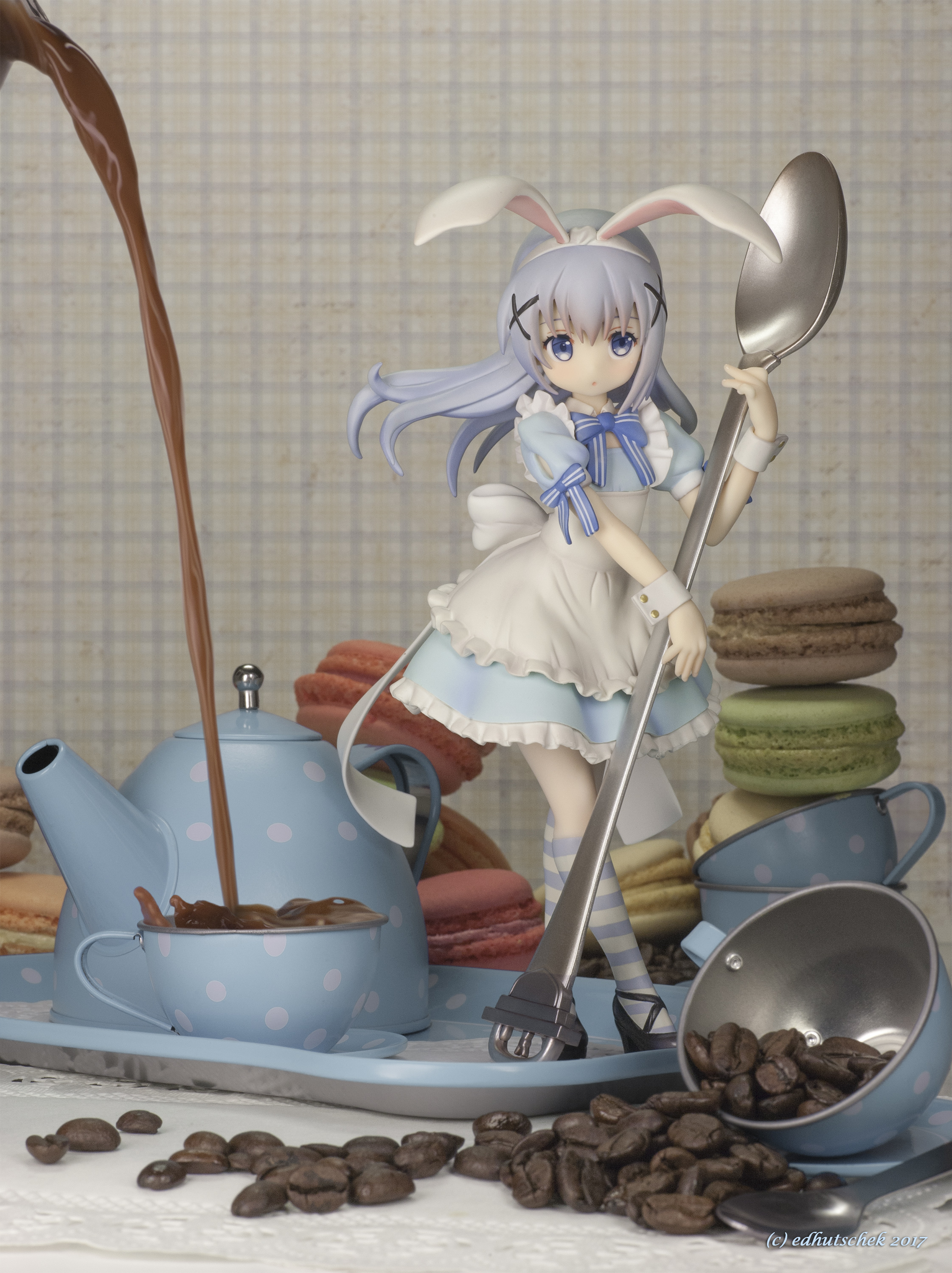 Nothing better than a cup of hot, invigorating coffee in the morning!


Since my previous Chino photo of Kotobukiyas “floating” version resulted in a strongly underwhelming final picture, I was curious to see how the attempt of shooting the newer “Alice version” from Aquamarine will turn out. And long story short: This time, with significant less prearrangement I was able to get much better results. So I guess it is a good example for the old saying “less is more”.

Also I have to give credit where credit is due: A big thank you to VikiBuNNy for not only buying the macarons in the backdrop, but also giving me a final advice how to proper set up this composition. Without her help this picture would look significant different. (Different equals worse)

edhutschek
SureFigures • 3 l. temu • #19462090Always nice to see your work get recognized like this.
Between the colors and the arrangement, I can't imagine a better composition. Stunning work!
Also, I'm curious about the "funny side note." The photo captions have a text limit and it appears to have been cut off.

Thank you and thank you for mentioning the text limit thing. I always tend to write long texts and didn’t know that there is such a thing like a limit. But I guess long texts under the pictures will be sacrificed anyway as soon as my new blog-site and fanpage will be live.

Anyhow, the last sentences was just a pointer that I also ordered the “Stronger” version of Chino as a magical girl and that I was wondering if that future photo will also be much better than this one.
But I guess we will never know if the figure gets delayed even further XD
3 l. temu

Plastik_Surgeon
Always nice to see your work get recognized like this.
Between the colors and the arrangement, I can't imagine a better composition. Stunning work!

Also, I'm curious about the "funny side note." The photo captions have a text limit and it appears to have been cut off.
3 l. temu

Allnighter
If only she could grind the coffee beans too....
3 l. temu

DidiMew
Such an amazing shot! I love how you set everything out, and Chino is so adorable. ^_^
3 l. temu

You're right! It would be quite a mess having the coffee poured into the cup that way, especially with the figure next to it. Not even I would go for such “extremes”.

But never the less, I actually poured the coffee in for real, but with only a smaller built set. First I shot the major jet running down the can into the cup, and then I poured the coffee in more wildly while doing continuous shooting in order to get a nice, big splash.

After that (and yes, the set was now full with coffee) I cleaned everything up, rebuild the set and added the not so waterproof things like macaroons, napkins and of course the figure.

Ultimately I pieced everything together by using good old Photoshop.
3 l. temu

edhutschek
Stalgonoff • 3 l. temu • #19304908Great shot! I regretted not preordering her, but I finally managed to get her at a good price and she should arrive in a week or so (:

All's well that ends well I guess :D
It's a simple yet beautiful figure.
3 l. temu